What Is A Commercial Coffee Maker?

A commercial coffee maker is the one that is capable of catering to the coffee needs of several people at a time, thus making them suitable for being used in commercial places. These coffee makers mainly find their application in commercial areas like workplaces, cafes and restaurants, and are characterized by their immense brewing speed and capacity.

Also they are famous for their non-stop brewing capability, thus catering to the demands of several people simultaneously throughout the day.

The key features of a commercial coffee maker include: 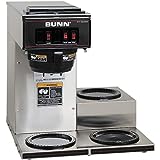 Let us have a look at the top 12 best commercial coffee makers available in the market.

The Breville BES870XL Barista Express Espresso Machine is a brushed stainless steel powerhouse that can automatically adjust the water temperature for that perfect espresso extraction temperature.

Its special feature includes its Grind Size dial that allows one to select the grind size no matter what type of bean is being grounded, and others like the hand free operation and micro-foam milk texturing facilities.

Built from Stainless Steel, this machine is as sturdy as one can demand, and also has a  hideaway storage compartment for cleaning tools.

The Wilbur Curtis Commercial Coffee Brewer has raised the bar in terms of durability and performance of commercial coffee makers. Being also known as the ‘Usain Bolt’ of coffee makers due to its tremendous brewing speed, it serves great for commercial purposes.

This 60-Cup commercial stainless steel coffee maker features an integrated spigot with a higher clearance, thereby allowing the Focus Foodservice 57060 to deliver its 9-quart capacity into even the tallest of mugs.

Equipped with a thermostat for delivering brew of perfect temperature, it has a durable stainless steel body with a dual option non-drip spigot with locking feature.

With this machine, one can expect to produce an average of 3.4 gallons of coffee per hour to fill 64-ounce decanters, and hence its brewing rate is ideal for all commercial purposes. Its  automatic features add to  user-convenience.

The Keurig brand has been a pioneer in the coffee maker industry for long, and even this coffee maker is one of the great products.

It’s advanced features involving a touch screen interface, as well as a 90-ounce water reservoir is surely designed to impress its users.

Its fast  brewing time of less than a minute, and providing brew in 4 different sizes makes this commercial coffee maker stand out.

The De’Longhi ESAM3300 is a commercial coffee maker that is designed simply to provide the users with the ultimate performance and quality.

It has a container of the size of about 8.8 ounces and on top, and the professional burr grinder provides freshness and taste of the highest grade.

Its features like easy-to-use rotary and push-button control panel with programmable menu settings and beans container provide the ultimate level of user comfort.

Its adjustable manual cappuccino system mixes steam and milk to create the perfect foam for your desired cappuccino. 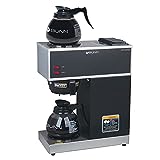 Possessing a compact size and two independently controlled warmers, the BUNN 33200.0015 VPR-2GD 12-Cup Pourover Commercial Coffee Brewer is one of the best commercial coffee makers available in the market. Also, it contains a pug and hence is portable and can be used in all commercial sectors.

This stainless steel made coffee maker has a highly aesthetic appearance and can start immediately brewing on pouring over water. It also comes with two black decanters and two warmers. 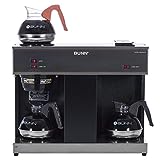 The BUNN 04275.0031 VPS 12-Cup Pourover Commercial Coffee Brewer is a perfect model that is suitable to serve as a commercial coffee maker due to its superior convenience and brewing speed over other coffee makers.

Its immense coffee brewing power can be well estimated by its capacity to brew 3.9 gallons or 14.7 liters of coffee per hour, and it’s 3 separately controlled warmers aid this coffee maker a lot in this process. In addition to this, its splash guard funnels and cheap price are the factors that set it apart from its competition 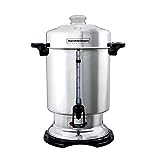 The Hamilton Beach Commercial Stainless Steel Coffee Urn is a perfect example of a true commercial coffee maker as it can produce 60 cups of coffee at a speed of a cup per minute.

It contains a transparent coffee window for easy determination of the inside coffee levels, and an easy lid to remove for refilling purposes.

This commercial coffee Urn with cup trip handle lets one fill cups fast with just one hand. It contains a polished stainless steel outer body and keeps a warm heater for maintenance of the coffee temperature.

The Wilbur Curtis Commercial Pourover Coffee Brewer is another modern commercial coffee maker that is capable of brewing huge amounts of coffee right throughout the day.

Its three available stations boost its brewing potential making it useful for any commercial arena like cafes, restaurants, or workplaces.

It doesn’t require any plumbing or electricity through wiring, and hence can be transferred easily from one workplace to another. 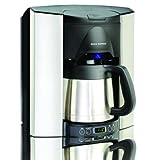 The Brew Express BEC-110BS coffee maker prevents any kind of mess  while putting water into the coffee maker, with the help of an integrated self-filling system.

Its other features such as cup selector and 10-cup Thermal carafe make it popular among the users, and it can be used for both domestic and commercial purposes. 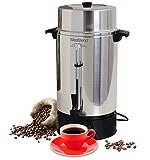 West Bend 33600 commercial coffee maker is very much  suitable for gatherings, small cafes, workplaces. It has a brewing capacity of 100 cups with the rate of one cup per minute.

It has a coffee-level gauge and interior water level markings, as well as an indicator light to inform the brewing state.

Let us have a look at some of the most critical factors that must be considered while selecting a commercial coffee maker.

In commercial places like cafes, restaurants etc., the coffee maker must be able to process brew at a very high speed, as well as should be able to produce higher quantities of brew at one operation, to cater the demands of a large section of customers.

Hence one must select a commercial coffee maker after analyzing its maximum brewing capacity, as well as average brewing time so that the coffee maker can satisfy the commercial needs and keep on delivering coffee at the desired rate throughout the day.

2. Durability of The Commercial Maker

Durability is another important factor for any commercial coffee maker. It’s because in commercial sectors, to meet up with the large scale brewing demands of people these coffee makers need to brew continuously, day-in and day-out. Hence a non-durable coffee maker will easily give up after a few days of extensive usage.

Thus the coffee maker must be compatible with rough and prolonged usage and should be able to brew at a rapid pace throughout the day, for several years.

For commercial usages the brewing taste plays a massive role. The coffee is manufactured for customers of different kinds and the success of the business machine will depend upon the customer feedback on the brew.

Since commercial coffee makers are designed to meet the brewing demands of a large number of people, the speed of brewing plays a massive role.

Hence coffee makers containing the latest automatic facilities and other convenient features such as light indicators and the easily-cleaning should surely be preferred.