What Is A Coffee Percolator?

A coffee percolator is a type of coffee-making pot that is used for brewing the coffee, and is one of the oldest methods of brewing that still exists today.

A coffee percolator brews coffee by continually cycling the boiling or boiling brew through the grounds using gravity until the required strength is reached.

The coffee percolators being one of the oldest coffee brewing tools, enjoyed immense popularity until about the early 1970s, after which suddenly automatic drip coffee makers rose to the scene and grabbed the limelight due to their better quality brew as acclaimed by the users.

One of the primary reasons behind the loss of the immense popularity of Coffee Percolators is their problem of over-extraction that arises due to exposure of the grounds to higher temperatures than other brewing methods.

In spite of such drawbacks, traditional coffee lovers still acclaim that the strong flavor of coffee produced by coffee Percolators is second to none, and for several such coffee enthusiasts Coffee Percolators still serve as one of the primary methods to brew coffee.

Being one of the most widely used Coffee Percolators, the Electric percolators are recognized for their durability, phenomenal cup of coffee, and necessary contraptions such as motors, heating elements, and electronics to further improve the cup of joe.

As suggested by their name, they operate with electricity and are definitely one of the most convenient ones to use and operate. However their only drawback is their inability to use outdoors due to lack of electric power.

Stovetop percolators are renowned for producing coffee that possesses rich flavor, strength, and aroma and hence is quite popular among enthusiasts preferring strong brew.

They can be distinguished from the other coffee makers with their long kettle like appearance and their unassuming façade hides a reliable, steam-powered, coffee-brewing vacuum.

Siphon coffee brewing machines use a combination of the percolation and infusion technique to prepare the joe. The steam forces hot water up the stem of the coffee ground container and mixes with the ground coffee.

Here the water vapor rises from the pressure chamber to the brewing chamber and then is cools down to prepare the brew. The siphon coffee makers are generally very delicate and due to their combination of percolation and infusion techniques, they succeed in producing rich aroma and flavored coffee.

Camping Percolators are coffee brewing pots that are capable of brewing coffee fast, without the use of electricity, at a camping site. They are specifically designed with special features suitable for outdoor conditions.

They can be either pressure type or gravity type. Most camping percolators are quite similar to Stovetop Coffee Percolators in terms of operation, with the difference that they are quite durable and designed to function in outdoor areas.

These are Coffee Percolators that operate using less electricity, and are only feasible to operate at home. Their ability to prepare coffee in the microwave, and brewing time of less than 5 minutes make them stand apart from, the other conventional coffee percolators.

However due to their limitation of being compatible only with microwaves, they are quite less popular compared to the other types.

How to Use A Coffee Percolator?

Although the method of working and usage varies according to the type of coffee percolator used, the basic process of usage remains more or less same to all.

The basic mechanism of any coffee percolator involves the circulation of boiling or near-boiling water through the coffee grounds until the desired strength is achieved.

How to Make Coffee in a Non-Electric Percolator  [Infographic] 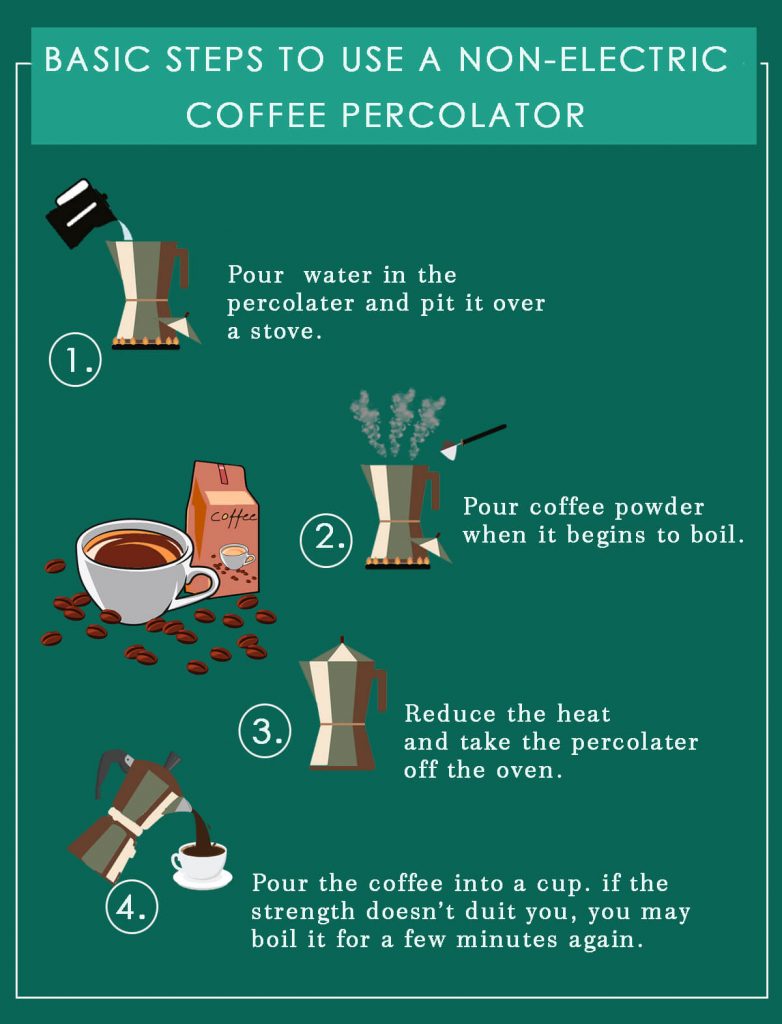 How to Make Coffee in an Electric Percolator  [Infographic] 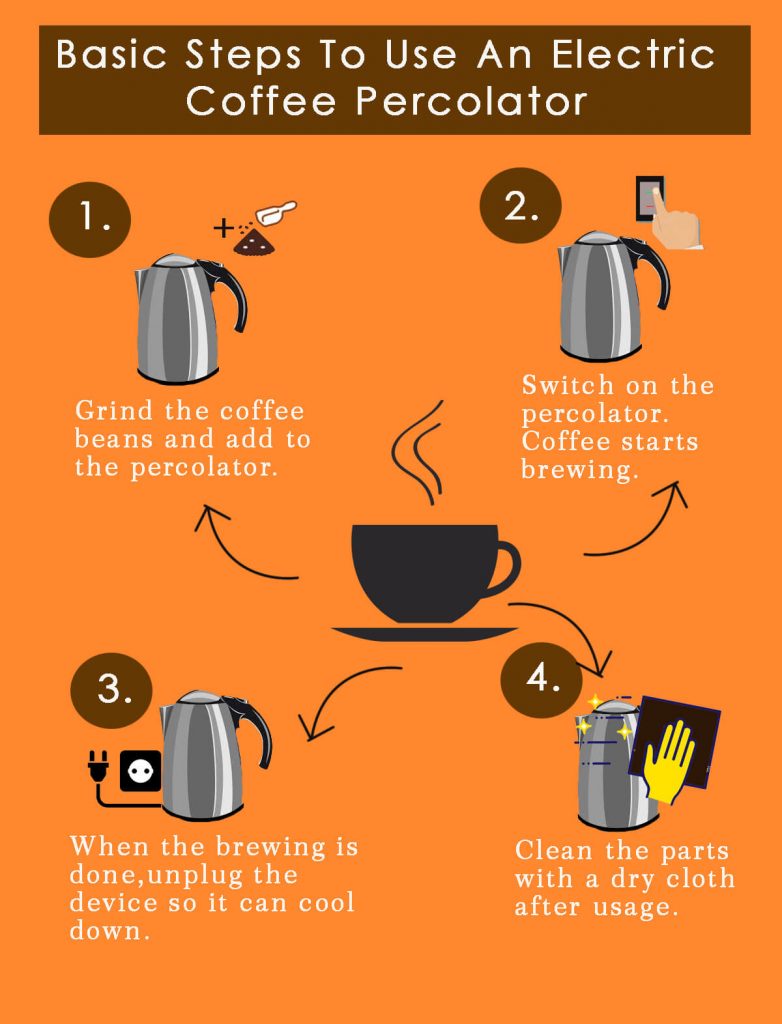 There are several special features and qualities associated with Percolated Coffee, that can’t be obtained in other brewing techniques. Some of those specialties are:

Hence any traditional coffee lover, who is drawn towards a cup of joe by its strong aroma, flavor, must use Coffee Percolators to obtain the desired brew.